“This was a strong year for the
CPP Fund as we achieved one of the largest yearly increases in assets since the
inception of CPPIB,” said Mark
Machin, President & Chief Executive Officer, Canada Pension Plan Investment
Board (CPPIB). “As always, we continue to focus on longer-term performance.
Year-by-year results will swing, but it is noteworthy that our 11.8% five-year
return mirrors our annual return. We believe this is a strong indicator of our
ability to generate steady, sustainable returns for generations of
beneficiaries to come.”

“We are
building a portfolio capable of delivering superior performance over multiple
generations to help ensure the long-term sustainability of the CPP,” said Mr.
Machin. “We remain disciplined in doing this, investing only in assets that we
believe will collectively deliver superior risk-adjusted returns over time. Our
portfolio is designed to withstand short-term market uncertainty.”

In
the most recent triennial review released in September 2016, the Chief Actuary
of Canada reaffirmed that, as at December 31, 2015, the CPP remains sustainable
at the current contribution rate of 9.9% throughout the forward-looking 75-year
period covered by his report. The Chief Actuary’s projections are based on the
assumption that the Fund’s prospective real rate of return, which takes into
account the impact of inflation, will average 3.9% over 75 years.

The Chief Actuary’s report also indicates that CPP
contributions are expected to exceed annual benefit payments until 2021, after
which a small portion of the investment income from CPPIB will be needed to
help pay pensions. In addition, the report confirmed that the Fund’s
performance was well ahead of projections for the 2013-2015 period as
investment income was 248% or $70 billion higher than anticipated.

The CPP’s multi-generational
funding and liabilities give rise to an exceptionally long investment horizon.
To meet long-term investment objectives, CPPIB continues to build a portfolio
designed to generate and maximize long-term
returns at an appropriate risk level. Accordingly, long-term investment
returns are a more appropriate measure of CPPIB’s performance than returns in
any given quarter or single fiscal year.

Relative Performance Against the Reference
Portfolio

CPPIB also measures
its performance against a market-based benchmark, the Reference Portfolio,
representing a passive portfolio of public market indexes that reflect the
level of long-term total risk that we believe is appropriate for the Fund.

To
provide a clearer view of CPPIB’s performance given our long-term horizon, we
track cumulative value-added returns since the April 1, 2006 inception of the
benchmark Reference Portfolio. Cumulative value-added over the past 11 years totals
$8.9 billion,
after all CPPIB costs.

“When public
markets soar, as they generally did this year, we expect the public equity-based
Reference Portfolio benchmark to perform exceptionally well,” said Mr. Machin. “Over
the longer term, the Investment Portfolio has outperformed the Reference
Portfolio over both the past five- and 10-year periods. Given our deliberate
choice to build a prudently diversified portfolio beyond just public equities
and bonds, we expect to see swings in performance relative to this benchmark,
either positive or negative, in any single year. Our investment portfolio is
designed to deliver value-building growth and be resilient during periods of
economic stress while adding value over the long term.”

This fiscal year reflected a decline in the operating
expense ratio for the second year in a row, as well as a slowdown in the growth
of CPPIB’s operating expenses. We are committed to maintaining cost discipline
in the years ahead. Approximately 32% of our personnel expenses are denominated
in foreign currencies and that percentage is expected to increase in the coming
years as we continue to hire specialized talent and skills where most of our
investing activities occur.

To generate the $33.5 billion of net income from
operations after all costs, CPPIB incurred total costs of $2,834 million for
fiscal 2017, compared to $2,643 million in total costs for the previous year. CPPIB total costs for fiscal 2017 consisted of $923 million,
or 31.3 basis points, of operating expenses; $987 million in management fees
and $477 million in performance fees paid to external managers; and $447
million of transaction costs. CPPIB reports on these distinct cost
categories, as each is materially different in purpose, substance and
variability. We report the investment management fees and transaction
costs we incur by asset class and report the net investment income our programs
generate after deducting these fees and costs. We then report on total Fund
performance net of these fees and costs, as well as CPPIB’s overall operating
expenses.

Transaction costs marginally increased by $10 million compared
to the prior year. This year, we completed 19 global transactions valued at
over $500 million, in addition to other transactions assessed across the
investment groups. Transaction costs vary from year to year as they are
directly correlated to the number, size and complexity of our investing
activities in any given period. 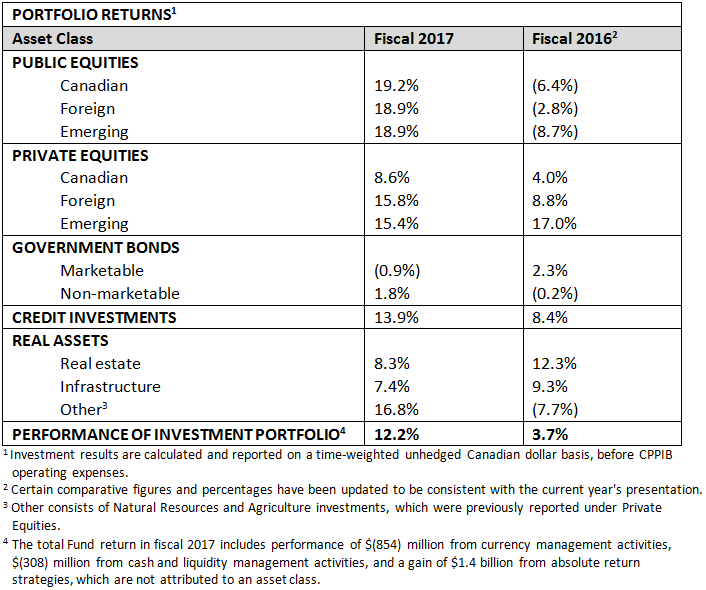 o   Ashleigh
Everett, appointed in February 2017, who is President, Corporate Secretary and
Director of Royal Canadian Securities Limited and has served on a number of
publicly listed companies.

About Canada Pension
Plan Investment Board

Canada Pension Plan
Investment Board (CPPIB) is a professional investment management organization that invests the funds not needed
by the Canada Pension Plan (CPP) to pay current benefits on behalf of 20
million contributors and beneficiaries. In order to build a diversified
portfolio of CPP assets, CPPIB invests in public equities, private equities,
real estate, infrastructure and fixed income
instruments. Headquartered in Toronto, with offices in Hong Kong, London,
Luxembourg, Mumbai, New York City, São Paulo and Sydney, CPPIB
is governed and managed independently of the Canada Pension Plan and at arm’s
length from governments. At March 31, 2017, the CPP Fund totalled $316.7 billion.
For more information about CPPIB, please visit www.cppib.com or
follow us on LinkedIn
or Twitter.