TORONTO, ON (November 13, 2014): The CPP Fund ended its second quarter of fiscal 2015 on September 30, 2014 with net assets of $234.4 billion, compared to $226.8 billion at the end of the previous quarter. The $7.6 billion increase in assets for the quarter consisted of $7.5 billion in net investment income after all CPPIB costs and $0.1 billion in net CPP contributions. The portfolio delivered a gross investment return of 3.4% for the quarter.

For the six month fiscal year-to-date period, the CPP Fund increased by $15.3 billion from $219.1 billion at March 31, 2014. This included $11.0 billion in net investment income after all CPPIB costs and $4.3 billion in net CPP contributions. The portfolio delivered a gross investment return of 5.1% for this period.

“During the quarter, our investment portfolio reflected mixed performance from the global public equity markets, balanced by solid returns from our fixed income assets and positive contributions from our private investments,” said Mark Wiseman, President & Chief Executive Officer, CPP Investment Board (CPPIB). “We continue to realize the benefits of a globally diversified, resilient portfolio that is designed to deliver superior returns over the long term.”

The Canada Pension Plan’s multigenerational funding and liabilities give rise to an exceptionally long investment horizon. To meet long-term investment objectives, CPPIB is building a portfolio and investing in assets designed to generate and maximize long-term returns. Long-term investment returns are a more appropriate measure of CPPIB’s performance than returns in any given quarter or fiscal year. 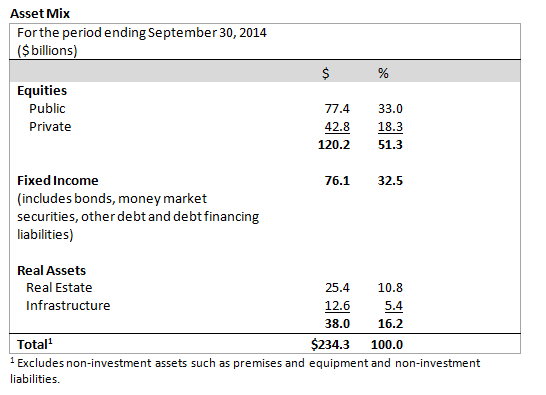 · Signed an agreement to invest approximately €376 million for a 39% stake in European car park operator, Interparking. Based in Brussels, Interparking is one of Europe’s largest car park management companies with a portfolio of 657 car parks in 350 cities.

· Received an additional Qualified Foreign Institutional Investor (QFII) quota of US$600 million to invest in China A-shares that are traded on the Shanghai and Shenzhen Stock Exchanges. Since 2011, when CPPIB obtained its QFII licence, a total allocation of US$1.2 billion has been granted to CPPIB, thereby making it the 8th largest QFII holder.

· Participated in the initial public offering of Chinese e-commerce firm, Alibaba Group Holding Limited. CPPIB has been an early investor in Alibaba since 2011 and has invested a total of US$314.5 million to date.

· Allocated an additional US$500 million to the Goodman North American Partnership (GNAP), a joint venture formed in 2012 between CPPIB and Goodman Group to assemble an institutional-quality, modern logistics and warehouse facilities in major U.S. markets. CPPIB’s aggregate allocation to GNAP now totals US$900 million representing a 45% interest in the joint venture. To date, GNAP has committed to six development projects in California with a total potential gross leasable area of 6.5 million square feet.

· Expanded CPPIB’s multifamily portfolio in the U.S. Over the past year, CPPIB has made equity commitments totalling US$330 million in six Class-A multifamily developments in California, Georgia and Massachusetts with over 2,200 luxury residential units. Since 2011, CPPIB has committed a total of US$1.3 billion in this sector with direct joint venture interests in over 8,400 units in eight U.S. markets.

· Wilton Re, a portfolio company owned by CPPIB and Wilton Re management, signed an agreement to acquire Transamerica Life Canada and other businesses from Aegon N.V. for C$600 million. Wilton Re will fund the transaction with additional equity capital provided by CPPIB.

· Exited CPPIB’s US$400 million investment in Formula One Group’s private high yield loan with total income received over the investment period of approximately US$100 million, resulting in an annualized return of 14.3%.

· Following quarter end, CPPIB sold its 39.4% interest in a Denver office properties joint venture to Ivanhoé Cambridge for US$209 million. CPPIB had made an equity investment of US$114 million in the joint venture in 2007. Proceeds from the sale to CPPIB were approximately US$132 million.

· Appointed Rodolfo Spielmann to the new role of Managing Director & Head of Latin America. In this role, Rodolfo will oversee CPPIB’s office in São Paulo, Brazil, providing leadership and coordination of CPPIB’s investment activities in Latin America and management of advisory relationships. Rodolfo brings more than 30 years of experience in finance and consulting, most recently as South America Practice Leader with Bain & Company.

· Launched preparations to open an office in Mumbai, India, in mid-2015, expanding CPPIB’s global presence in the Sub-continent. The Mumbai office will enable CPPIB to leverage local expertise and build important partnerships in India, which is a key long-term growth market for CPPIB.

Canada Pension Plan Investment Board (CPPIB) is a professional investment management organization that invests the funds not needed by the Canada Pension Plan (CPP) to pay current benefits on behalf of 18 million Canadian contributors and beneficiaries. In order to build a diversified portfolio of CPP assets, CPPIB invests in public equities, private equities, real estate, infrastructure and fixed income instruments. Headquartered in Toronto, with offices in Hong Kong, London, New York City and São Paulo, CPPIB is governed and managed independently of the Canada Pension Plan and at arm’s length from governments. At September 30, 2014, the CPP Fund totalled $234.4 billion. For more information about CPPIB, please visit www.cppib.com.