“The CPP Fund generated exceptional returns this year, achieving both the highest one-year return and annual investment income since our inception,” said Mark Wiseman, President & Chief Executive Officer, CPP Investment Board (CPPIB). “More importantly, our 10-year return, a measure that better indicates how we seek to serve contributors and beneficiaries, reached 8.0% on a net basis.”

In the 10-year period up to and including fiscal 2015, CPPIB has contributed $129.5 billion in cumulative net investment income to the Fund after all CPPIB costs, and over $151.5 billion since inception in 1999, meaning that over 57% of the Fund’s cumulative assets are the result of investment income.

“First, let me cite the hard work, dedication and capabilities of the CPPIB team across all of our offices, as well as close collaboration with our key partners worldwide,” added Mr. Wiseman. “Many factors helped lift the year’s results but the impact of decisions made over several years – and patience – is evident.”

Multiple factors contributed to fiscal 2015 growth, including all major public equity markets, bonds, private assets and real estate holdings. Combined, all three of CPPIB’s investment departments delivered substantial investment income to the Fund. International markets, both emerging and developed markets, advanced significantly, boosting returns further as CPPIB continues to diversify the Fund. The benefit of the Fund’s diversification across currencies also played a role in its returns, as the Canadian dollar fell against certain currencies, including the U.S. dollar.

“While any large increase helps foster public confidence in the sustainability of the Fund, results can and will fluctuate in any given year,” said Mr. Wiseman. “The Fund’s horizon, size and funding allow us to accept more risk and invest differently than almost all other investors, including having a high tolerance for potential future negative shocks. In the same way that we temper our enthusiasm for this year’s exceptional performance, we will also stay on course even through negative returns in any given short-term period. As a result of our unique position, we focus on long-term results of 10-plus years.”

The Canada Pension Plan’s multi-generational funding and liabilities give rise to an exceptionally long investment horizon. To meet long-term investment objectives, CPPIB is building a portfolio and investing in assets designed to generate and maximize long-term returns. Long-term investment returns are a more appropriate measure of CPPIB’s performance than returns in any given quarter or single fiscal year.

CPPIB measures its performance against a market-based benchmark, the Reference Portfolio, representing a passive portfolio of public market investments that can reasonably be expected to generate the long-term returns needed to help sustain the CPP at the current contribution rate.

“Dollar value-added is an important measure as it shows the difference between active investments made relative to their benchmarks in dollar terms. We will maintain a greater focus on total Fund – absolute as well as relative – returns, by continuing to develop and apply our capabilities more widely to portfolio management,” said Mr. Wiseman. “Our attention to both measures helps maximize returns, CPPIB’s objective, in the best interests of current and future beneficiaries, since the source of pension benefits is the total Fund. To reduce volatility, DVA is particularly valuable when it is generated as loss reduction in negative market conditions. Both total returns and DVA can vary widely from year-to-year depending on market conditions. Accordingly, both measures must be looked at over longer periods of at least one market cycle, such as five years or more.”

CPPIB total costs for fiscal 2015 consisted of $803 million or 33.9 basis points of operating expenses, $1,254 million of external management fees and $273 million of transaction costs. CPPIB reports on these distinct cost categories as each is materially different in purpose, substance and variability. We report the external management fees and transaction costs we incur by asset class and report the investment income our programs generate net of these fees. We then report on total Fund performance net of CPPIB’s overall operating expenses.

Fiscal 2015 CPPIB operating expenses reflect increased incentive compensation due to strong total Fund and DVA performance over the past four years, and the continued expansion of CPPIB’s operations and further development of our capabilities to support 17 distinct investment programs. International operations accounted for approximately 30% of operating expenses, including the impact of a weaker Canadian dollar relative to countries we have operations in. 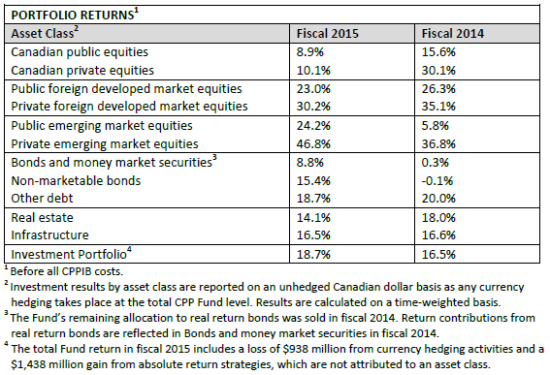 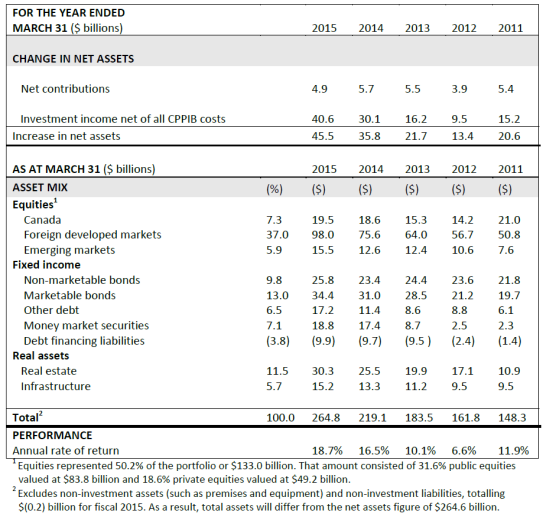 During fiscal 2015, CPPIB completed 40 transactions of over $200 million each, in 15 countries around the world. Highlights for the year include:

· Signed an agreement to invest approximately £1.6 billion to acquire a 33% stake in Associated British Ports (ABP) with Hermes Infrastructure, an existing U.K.-based partner. ABP is the U.K.’s leading ports group, owning and operating 21 ports with a diverse cargo base, long-term contracts with a broad mix of blue chip customers and experienced management.

· Expanded our Australian infrastructure portfolio with a A$525 million commitment to build and operate a new tunnelled motorway in Sydney, called NorthConnex. This transaction was completed with Transurban Group and Queensland Investment Corporation, our existing partners in the Westlink M7 toll road. CPPIB will own a 25% stake in the nine-kilometre motorway that will connect Sydney’s northern suburbs with the orbital road network and will be the longest road tunnel project in Australia.

· Received an additional Qualified Foreign Institutional Investor (QFII) quota of US$600 million to invest in China A-shares that are traded on the Shanghai and Shenzhen Stock Exchanges. Since 2011, when CPPIB obtained its QFII licence, a total allocation of US$1.2 billion has been granted to CPPIB, thereby making it among the top 10 largest QFII holders.

· Entered into a new real estate sector with the 100% acquisition of a U.K. student accommodation portfolio and management platform operating under the Liberty Living brand, at an enterprise value of £1.1 billion. Liberty Living is one of the U.K.’s largest student accommodation providers with more than 40 high-quality residences located in 17 of the largest university towns and cities across the U.K.

· Committed RMB 1,250 million to jointly develop the Times Paradise Walk project, a major mixed-use development in Suzhou, the fifth most affluent city in China, with Longfor Properties Company Ltd. The mixed-use development comprises residential, office, retail and hotel space for a total gross floor area of 7.9 million square feet. It is designed to be a top-quality, one-stop commercial destination in Suzhou with completion scheduled in multiple phases between 2016 and 2019.

· Significantly expanded CPPIB’s real estate portfolio in Brazil during the year. We committed approximately R$1.3 billion to Brazilian retail, logistics and residential assets this year, bringing our total equity commitment to date to R$5.5 billion. This included a R$507 million commitment for a 30% ownership stake in a new joint venture with Global Logistic Properties comprising a high-quality portfolio of logistics properties located primarily in São Paulo and Rio de Janeiro.

· Invested approximately €236 million in Citycon Oyj to hold 15% of the shares and voting rights, expanding CPPIB’s retail platform in the Nordic region. Citycon is a leading owner and developer of grocery-anchored shopping centres in the region. The investment helped to support Citycon’s acquisition and development opportunities.

· Entered into a joint venture partnership with GIC to acquire the D-Cube Retail Mall in Seoul, South Korea from Daesung Industries for a total consideration of US$263 million. Following the transaction, GIC and CPPIB will each own a 50% stake in the mall. Completed in 2011, D-Cube is an income-generating, high-quality retail mall in a prime location.

· Entered into an agreement to form a strategic joint venture with Unibail-Rodamco, the second largest retail REIT in the world and the largest in Europe, to grow CPPIB’s German retail real estate platform. The joint venture will be formed through CPPIB’s indirect acquisition of a 46.1% interest in Unibail-Rodamco’s German retail platform,  mfi management fur immobilien AG (mfi), for €394 million. In addition, CPPIB will invest a further €366 million in support of mfi’s financing strategies.

· Signed an agreement to acquire an approximate 12% stake, by investing £1.1 billion alongside Hutchison Whampoa, in the telecommunications entity that will be created by merging O2 U.K. and Three U.K.

· Signed a definitive agreement to acquire Informatica Corporation for US$5.3 billion, or US$48.75 in cash per common share, alongside our partner, the Permira funds. Informatica is the world’s number one independent provider of enterprise data integration software. The transaction is expected to be completed in the second or third quarter of calendar 2015.

· Invested US$335 million in the senior secured notes of Global Cash Access, Inc. (GCA) through our Principal Credit Investments group. GCA is the leading provider of cash access solutions and related gaming and lottery products to the gaming sector.

· Signed an agreement, together with BC European Capital IX (BCEC IX), a fund advised by BC Partners, management and other co-investors, to sell a 70% stake in Cequel Communications Holdings, LLC (together with its subsidiaries, Suddenlink) to Altice S.A. Upon closing of the proposed sale, it is expected that BCEC IX and CPPIB will each receive proceeds of approximately US$960 million and a vendor note of approximately US$200 million. CPPIB and BCEC IX will each retain a 12% stake in the company.

· Announced that AWAS, a leading Dublin-based aircraft lessor, signed an agreement to sell a portfolio of 90 aircraft to Macquarie Group Limited for a total consideration of US$4 billion. CPPIB owns a 25% stake in AWAS alongside Terra Firma, which owns the remaining 75% stake.

· Sold our 50% interest in 151 Yonge Street to GWL Realty Advisors. Proceeds from the sale to CPPIB were approximately $76 million. Located in downtown Toronto, 151 Yonge Street was acquired in 2005 as part of a larger Canadian office portfolio acquisition.

· Sold our 39.4% interest in a Denver office properties joint venture to Ivanhoé Cambridge. Proceeds from the sale to CPPIB were approximately US$132 million.

· In May 2015, we continued to expand our global presence with the official opening of a CPPIB office in Luxembourg, representing our sixth international office. We have a significant and growing asset base in Europe today. Establishing an office in Luxembourg supports our global strategy of building out our internal capabilities to support our long-term investment goals. Through our Luxembourg office, we will conduct asset management activities such as investment monitoring, cash management, finance and operations, including transaction support, legal and regulatory compliance.‎ Looking ahead, we expect to complete our previously announced plans to open an office in Mumbai later in calendar 2015.

· Welcomed the appointment of Dr. Heather Munroe-Blum as the new Chair of CPPIB’s Board of Directors. Dr. Munroe-Blum succeeded Robert Astley, CPPIB’s Chair since 2008, upon the expiry of his term on October 26, 2014.

· Welcomed the appointment of Tahira Hassan to CPPIB’s Board of Directors in February 2015 for a three-year term. Ms. Hassan also serves as a non-executive Director on the Boards of Brambles Limited and Recall Holdings Limited and held various executive leadership roles with Nestlé for more than 26 years.

o   Following the year end, Patrice Walch-Watson was appointed to Senior Managing Director & General Counsel and Corporate Secretary, and a member of the Senior Management Team, effective June 5, 2015. Ms. Walch-Watson joins CPPIB from Torys LLP where she was a Partner, with expertise in mergers and acquisitions, corporate finance, privatization and corporate governance.

Canada Pension Plan Investment Board (CPPIB) is a professional investment management organization that invests the funds not needed by the Canada Pension Plan (CPP) to pay current benefits on behalf of 18 million contributors and beneficiaries. In order to build a diversified portfolio of CPP assets, CPPIB invests in public equities, private equities, real estate, infrastructure and fixed income instruments. Headquartered in Toronto, with offices in Hong Kong, London, Luxembourg, New York City and São Paulo, CPPIB is governed and managed independently of the Canada Pension Plan and at arm’s length from governments. At March 31, 2015, the CPP Fund totalled $264.6 billion. For more information about CPPIB, please visit www.cppib.com.