“Several factors contributed to the Fund’s results this quarter beginning with the continuing advance of public equities globally, led by the Canadian market,” said Mark Wiseman, President & Chief Executive Officer. “All of our programs reported positive investment returns during the quarter and we continued to further diversify the portfolio globally across various asset classes.”

The Canada Pension Plan’s multigenerational funding and liabilities give rise to an exceptionally long investment horizon. To meet long-term investment objectives, CPPIB is building a portfolio and investing in assets designed to generate and maximize long-term returns. Long-term investment returns are a more appropriate measure of CPPIB’s performance than returns in any given quarter or fiscal year. 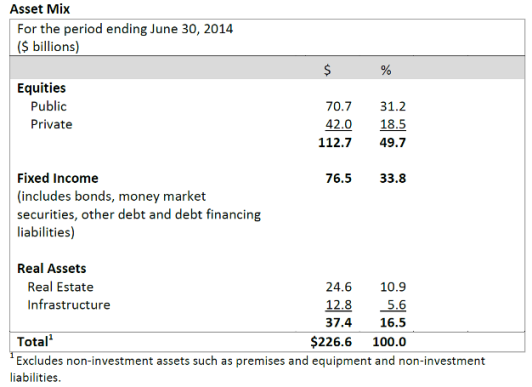 · Acquired 10.4 million common shares of Markit Ltd. at a price of US$24.00 per common share, as part of Markit’s initial public offering. CPPIB’s total investment of US$250 million represents an approximate 6% ownership interest. CPPIB has the right to nominate one director for appointment to Markit’s Board of Directors. Founded in 2003, Markit is a globally diversified provider of financial information services with 22 offices in 10 countries.

· Completed an additional investment of US$108 million to increase CPPIB’s ownership interest in One Park Avenue to 45% through a joint venture with Vornado Realty Trust. CPPIB previously held an indirect stake of approximately 11% through its investment in the Vornado Capital Partners Parallel LP fund. The parties valued the property at US$560 million, including the assumption of US$250 million of debt.  One Park Avenue is a 20‑storey, 941,000 square foot Class A office building located in Midtown Manhattan.

· Invested approximately €236 million in Citycon Oyj, a leading owner and developer of shopping centres in the Nordic region, through a directed share issue to CPP Investment Board European Holdings S.àr.l (CPPIBEH), a wholly-owned subsidiary of CPPIB and through a subsequent rights issue to all shareholders. Following both share issues, CPPIBEH holds 15% of the shares and voting rights in Citycon. The investment expands CPPIB’s retail platform in the region.

· Entered into a joint venture with WAM Development Group and Walton Group of Companies to develop a 250 acre industrial site in northwest Edmonton, Alberta. The development project will result in the creation of approximately four million square feet of distribution and logistics warehouse space. CPPIB, Walton and WAM Development Group will share in the ownership structure of the development project, with CPPIB initially committing to approximately $200 million for phase one representing an 85% interest in the joint venture.

· Welcomed the appointment of Dr. Heather Munroe-Blum as incoming Chairperson of CPPIB’s Board of Directors. Dr. Munroe-Blum will succeed Robert Astley, CPPIB’s Chairperson since 2008, upon the expiry of his term on October 26, 2014.

Canada Pension Plan Investment Board (CPPIB) is a professional investment management  organization that invests the funds not needed by the Canada Pension Plan (CPP) to pay current benefits on behalf of 18 million Canadian contributors and beneficiaries. In order to build a diversified portfolio of CPP assets, CPPIB invests in public equities, private equities, real estate, infrastructure and fixed income instruments. Headquartered in Toronto, with offices in Hong Kong, London, New York City and São Paulo, CPPIB is governed and managed independently of the Canada Pension Plan and at arm’s length from governments. At June 30, 2014, the CPP Fund totalled $226.8 billion. For more information about CPPIB, please visit www.cppib.com.