The Fund, which includes the combination of both the base CPP and additional CPP accounts, achieved 10-year and five-year annualized net nominal returns of 11.1% and 10.7%, respectively. For the fiscal year, the Fund returned 8.9% net of all Canada Pension Plan Investment Board (CPPIB) costs.

“CPPIB continues to deliver strong absolute and relative returns, and our robust 10-year performance demonstrates our long-term contribution to the sustainability of the CPP,” says Mark Machin, President & Chief Executive Officer, CPPIB. “We have gradually built a diversified, global investment platform and focused on executing our multi-year strategy – these are key drivers of our financial performance and our future success.”

Fiscal 2019 brought on a range of market conditions, including a public equity market downturn in December, which was bookended by rising equity markets at the beginning and end of the period. CPPIB’s portfolio management strategy benefits from ascending public equity markets, while alternative assets and our private investments can help to moderate the impact of significant market drops, even as they produce growth over longer periods.

“The role of diversification came through clearly this year, and we were encouraged to see nearly all investment departments contributed positively to our results. CPPIB’s investment teams also took advantage of our international reach and competitive strengths to pursue select transactions as well as explore new areas of growth,” Mr. Machin added.

CPPIB’s progress this year coincided with its 20-year milestone of investing in the best interests of CPP contributors and beneficiaries.

“CPPIB has evolved through multiple phases over the last two decades, from our early days of active management, to our first steps on the world’s stage, and now to investing additional CPP amounts. What has been consistent is our adaptability as we continually prepare for the next era, while at the same time demonstrating an ability to seize the new opportunities we see before us today,” says Mr. Machin. “Financial performance is at the heart of what CPPIB does, and our strategy is on track.”

In the five-year period up to and including fiscal 2019, CPPIB has contributed $152.0 billion in cumulative net income to the Fund after all CPPIB costs. Since CPPIB’s inception in 1999, it has contributed $247.6 billion on a net basis.

“Beginning to accept, invest and manage additional CPP contribution amounts in January marked a pivotal moment in CPPIB’s journey, and was the culmination of more than a year of preparations. This new CPP program has the full advantage of CPPIB’s global network, expertise, investment strategies and risk governance framework,” Mr. Machin added.

Long-Term Sustainability
Every three years, the Office of the Chief Actuary of Canada conducts an independent review of the sustainability of the CPP over the next 75 years. In the most recent triennial review released in September 2016, the Chief Actuary of Canada reaffirmed that, as at December 31, 2015, the base CPP remains sustainable at the current contribution rate of 9.9% throughout the forward-looking 75-year period covered by the actuarial report.

In fiscal 2019, the base CPP earned a net return of 8.9% and outperformed its Reference Portfolio’s return of 6.6% by 2.3%. This equates to a single-year net dollar value-added return of $6.4 billion, after deducting all costs.

The Fund grows not only through the value added in single years but also through the compounding effect of continuous reinvestment of gains (or losses). We calculate compounded dollar value-added as the total net dollars CPPIB has added to the Fund through all sources of active management, above the returns of the Reference Portfolios. CPPIB has generated $29.2 billion of compounded dollar value-added, after all costs, since the inception of active management at April 1, 2006.

Managing CPPIB Costs
CPPIB is committed to maintaining cost discipline as we continue to build a global platform that will enhance our ability to invest over the long term.

To generate $32.0 billion of net income from operations after all costs, CPPIB incurred operating expenses of $1,203 million, $1,586 million in investment management fees paid to external managers, and $477 million of transaction costs. Altogether, these costs total $3,266 million for fiscal 2019, compared to $3,192 million for the previous year. We report the net investment income that each department generates after deducting these costs. We then report on total Fund performance net of costs, which includes CPPIB’s overall operating expenses.

Total operating expenses of $1,203 million represent 32.8 cents for every $100 of invested assets. Investment management fees decreased by $152 million in the fiscal year, driven by lower performance fees paid to external fund managers as a result of underperformance in public markets strategies in our second and third quarters. A portion of investment management fees include performance fees that are paid when CPPIB earns returns above pre-determined hurdle rates, which helps ensure an alignment of interests.

Transaction costs increased by $76 million compared to the prior year. Transaction costs vary from year to year as they are directly correlated to the number, size and complexity of our investing activities in any given period. In fiscal 2019, 69 of the transactions we completed were valued at more than $300 million each.

The above costs include $9 million of non-recurring additional CPP start-up costs. These start-up costs have been excluded from the net investment return calculation for additional CPP noted above. A breakdown of costs by base and additional CPP accounts is included in the CPPIB Annual Report for fiscal 2019, which is available at www.cppib.com. 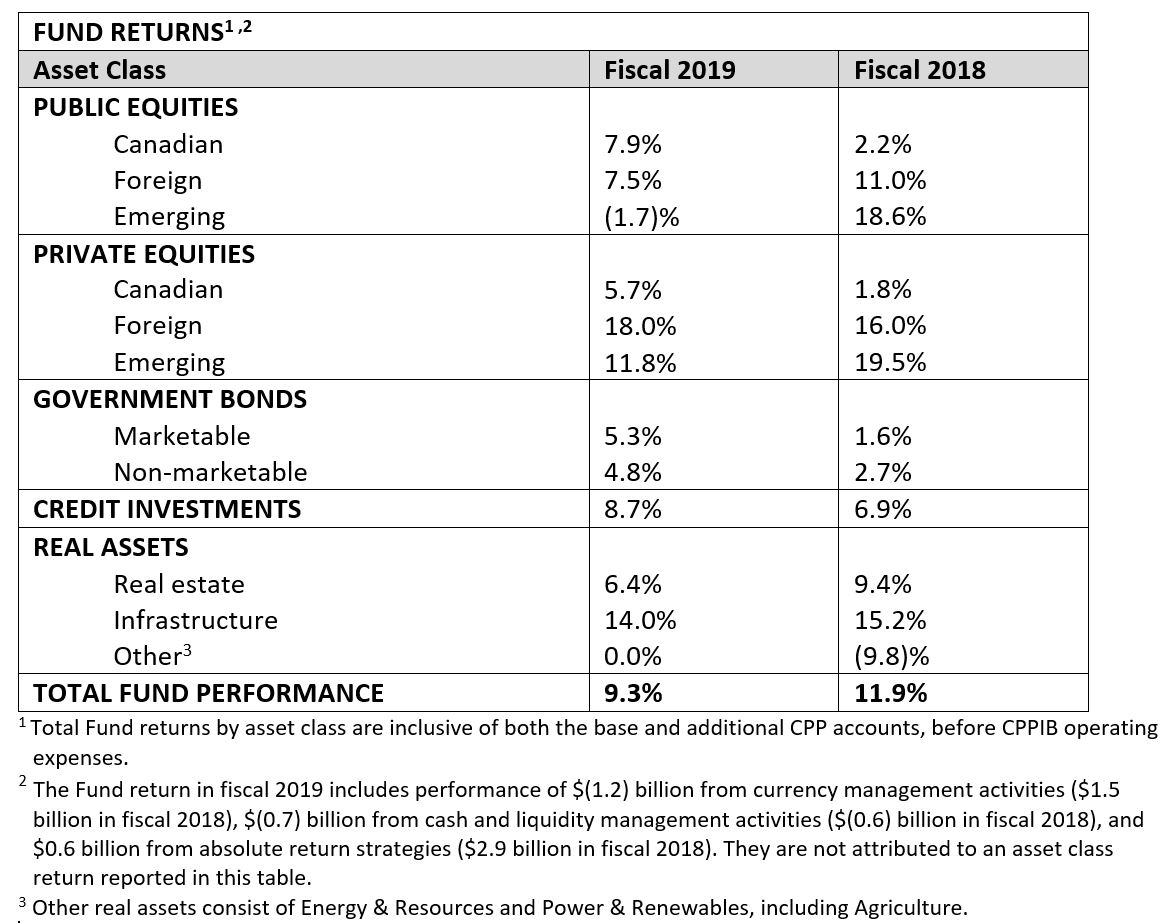 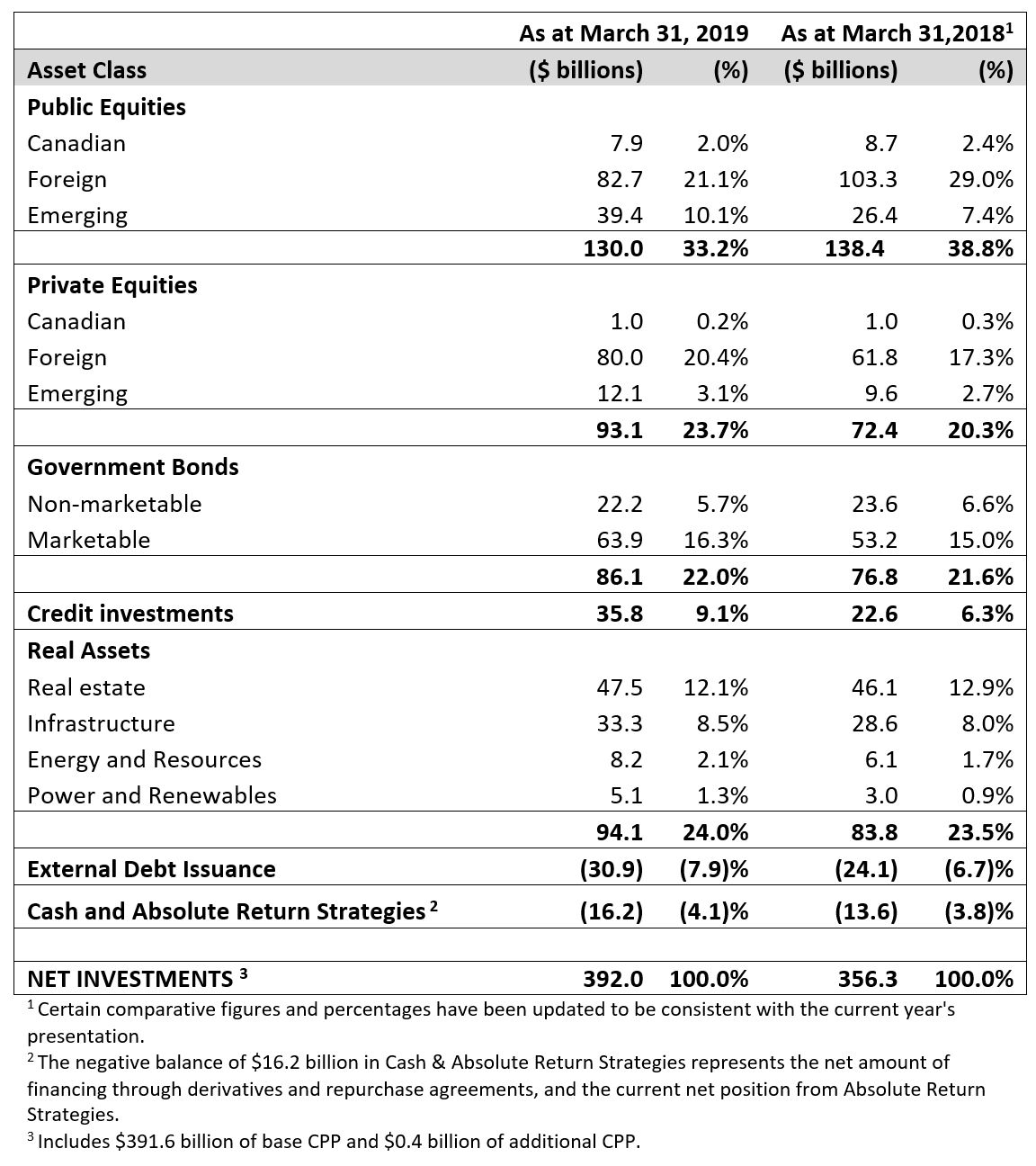 Investment Highlights:
Highlights for the year include:

About Canada Pension Plan Investment Board
Canada Pension Plan Investment Board (CPPIB) is a professional investment management organization that invests the funds not needed by the Canada Pension Plan (CPP) to pay current benefits in the best interests of 20 million contributors and beneficiaries. In order to build a diversified portfolio, CPPIB invests in public equities, private equities, real estate, infrastructure and fixed income instruments. Headquartered in Toronto, with offices in Hong Kong, London, Luxembourg, Mumbai, New York City, São Paulo and Sydney, CPPIB is governed and managed independently of the Canada Pension Plan and at arm’s length from governments. At March 31, 2019, the CPP Fund totalled C$392.0 billion. For more information about CPPIB, please visit www.cppib.com or follow us on LinkedIn, Facebook or Twitter.