All figures in Canadian dollars unless
otherwise noted.

TORONTO, ON (November
10, 2017): The CPP Fund ended its second quarter of fiscal 2018 on September
30, 2017, with net assets of $328.2 billion, compared with $326.5 billion at
the end of the previous quarter. The $1.7 billion net increase in assets for
the quarter consisted of $2.3 billion in net income after all CPPIB costs, less
$0.6 billion in net Canada Pension Plan (CPP) cash outflows. The CPP Fund
routinely receives more CPP contributions than required to pay benefits during
the first part of the calendar year, partially offset by benefit payments
exceeding contributions in the final months. On an annual basis,
contributions to the Fund continue to exceed outflows.

The portfolio achieved 10-year and five-year net nominal
returns of 6.9% and 11.8%, respectively, and 0.7% net of all CPPIB costs for
the quarter.

CPPIB’s 10-year annualized net nominal rate of return of 6.9%,
or 5.3% on a net real rate of return basis, was above the Chief Actuary’s
assumption of expected performance over this same period. The real rate of
return is reported net of all CPPIB costs to be consistent with the Chief
Actuary’s approach.

In the most recent triennial review released in September
2016, the Chief Actuary of Canada reaffirmed that, as at December 31, 2015, the
CPP remains sustainable at the current contribution rate of 9.9% throughout the
forward-looking 75-year period covered by the actuarial report. The Chief
Actuary’s projections are based on the assumption that the Fund’s prospective
real rate of return, which takes into account the impact of inflation, will
average 3.9% over 75 years.

The report confirmed that the Fund’s performance was ahead
of projections for the 2013-2015 period as investment income was 248%, or $70
billion, higher than anticipated.

The CPP’s multi-generational funding and liabilities give
rise to an exceptionally long investment horizon. To meet long-term investment
objectives, CPPIB continues to build a portfolio designed to generate and
maximize long-term returns at an appropriate risk level. Accordingly, long-term
investment returns are a more appropriate measure of CPPIB’s performance than
returns in any given quarter or single fiscal year. 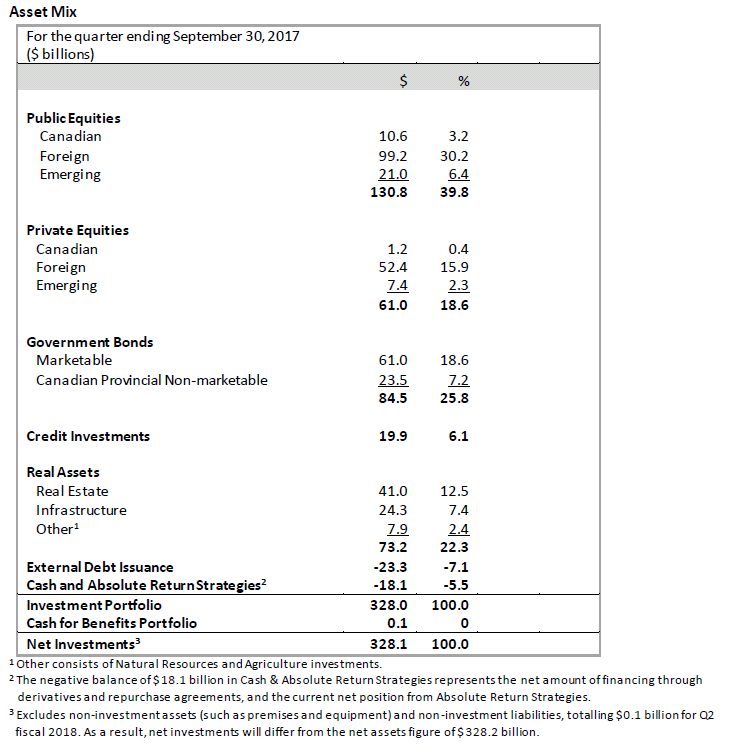 ·      Signed an agreement to participate in
the acquisition of Calpine Corporation, one of the largest independent power
generators in the United States. CPPIB will make this investment as part of a
consortium comprised of Energy Capital Partners and other investors for US$5.6
billion in cash. CPPIB will invest US$750 million. The transaction is subject
to regulatory and shareholder approval and other customary closing conditions.

·      Signed
an agreement with Gas Natural Fenosa alongside Allianz Capital Partners (ACP) to
acquire a 20% minority equity interest in its gas distribution business in
Spain (GNDB) for €1.5 billion. CPPIB will invest €900 million and ACP will
invest €600 million. GNDB is the largest gas distribution network in Spain with
more than 5.3 million connection points and serving some 1,100
municipalities. The transaction is subject to customary closing conditions
and regulatory approvals.

·
Invested US$400 million of equity in WME | IMG, a
global leader in entertainment, sports and fashion now known as Endeavor,
representing an 8% minority interest in the company. Endeavor specializes in
talent representation and management; brand strategy, activation and licensing;
media production, sales and distribution; and event management.

·      Acquired the rights to a portion of
royalties in venetoclax, a cancer treatment drug, from the Walter and Eliza
Hall Institute of Medical Research. The transaction includes a cash payment of
US$250 million upfront and potential milestone payments up to US$75 million.

·      Signed
a definitive purchase and sale agreement with Shell Overseas Holdings Ltd
(Shell) to acquire 100% of Shell E&P Ireland Limited, which holds Shell’s
45% interest in Corrib Natural Gas Field in Ireland (Corrib), for a total initial
cash consideration of €830 million, with
additional payments of up to €250 million between 2018-2025, subject to gas
price and production. CPPIB and Vermilion Energy Inc. (Vermilion)
entered into a strategic partnership whereby Vermilion will operate the Corrib
assets after completion of the acquisition. The transaction is subject to
customary conditions and receipt of all necessary government consents.

·
Acquired a land parcel in Pune, India for INR
1.61 billion (C$32.0 million) alongside The Phoenix Mills Limited through the
joint strategic investment platform, Island Star Mall Developers Pvt. Ltd
(ISMDPL). The site is the platform’s first acquisition and has a development
potential of approximately 1.6 million square feet. CPPIB has invested INR 7.2
billion (C$145 million) in ISMDPL and owns 30% in the platform, which was
formed in April 2017 to develop, own and operate retail-led, mixed-use
developments in India.

·
Agreed to provide a £250 million subordinated
facility to intu properties plc (intu). The subordinated facility will support
intu’s corporate business plans and is indirectly secured by the intu Trafford
Centre in Manchester, one of the U.K.’s top five shopping centres.

·
Acquired a 50% equity stake in Milton Park, one
of Europe’s largest integrated business, science and technology parks, from
Hermes Investment Management for approximately £200 million. Located in the
Thames Valley region of the U.K., Milton Park is home to over 250 organizations
employing over 9,000 people.

·
Sold our 50% ownership interest in Constitution Square, an Ottawa
office property. Net proceeds to CPPIB from the sale were approximately C$240
million before customary closing adjustments. CPPIB acquired its ownership interest
in 2005.

·
Sold all farmland assets owned by Agriculture Company of America. Net proceeds
to CPPIB from the sale were approximately US$520 million. CPPIB
accumulated its U.S. farmland assets over a four-year period from 2013 to 2016.

·
Partnered with Alpha Investment Partners Limited (Alpha) and
Keppel Data Centres Holding Pte. Ltd., for an initial allocation of up to
US$350 million alongside the Alpha Data Centre Fund (ADCF), with the option to
invest another US$150 million. Launched in 2016 by Alpha, ADCF aims to develop
a quality portfolio of new and existing data centre assets in Asia Pacific and
Europe.

About Canada Pension Plan
Investment Board

Canada Pension Plan Investment Board (CPPIB) is a
professional investment management organization that invests the funds not
needed by the Canada Pension Plan (CPP) to pay current benefits on behalf of 20
million contributors and beneficiaries. In order to build a diversified
portfolio of CPP assets, CPPIB invests in public equities, private equities,
real estate, infrastructure and fixed income instruments. Headquartered in
Toronto, with offices in Hong Kong, London, Luxembourg, Mumbai, New York City,
São Paulo and Sydney, CPPIB is governed and managed independently of the Canada
Pension Plan and at arm’s length from governments. At September 30, 2017, the
CPP Fund totalled $328.2 billion. For
more information about CPPIB, please visit www.cppib.com
or follow us on LinkedIn
or Twitter.

Certain
statements included in this press release constitute forward-looking statements
with respect to CPPIB’s future financial or business performance, strategies or
expectations.  Forward-looking statements
are typically identified by words or phrases such as “trend,” “potential,”
“opportunity,” “believe,” “expect,” “anticipate,” “current,” “intention,”
“estimate,” “position,” “assume,” “outlook,” “continue,” “remain,” “maintain,”
“sustain,” “seek,” “achieve,” and similar expressions, or future or conditional
verbs such as “will,” “would,” “should,” “could,” “may” and similar
expressions. The
forward-looking statements are not historical facts but reflect CPPIB’s current
expectations regarding future results or events. These forward-looking
statements are subject to a number of risks and uncertainties that could cause
actual results or events to differ materially from current expectations,
including available investment income, intended acquisitions, regulatory and
other approvals and general investment conditions. Although CPPIB believes that
the assumptions inherent in the forward-looking statements are reasonable,
forward-looking statements are not guarantees of future performance and,
accordingly, readers are cautioned not to place undue reliance on such
statements due to the inherent uncertainty therein. CPPIB does not undertake to
publicly update such statements to reflect new information, future events,
changes in circumstances or for any other reason.  The information contained
on CPPIB’s website is not a part of this press release.