TORONTO, ON (February 13, 2015): The CPP Fund ended its third quarter of fiscal 2015 on December 31, 2014, with net assets of $238.8 billion, compared to $234.4 billion at the end of the previous quarter. The $4.4 billion increase in assets for the quarter consisted of $7.3 billion in net investment income after all CPPIB costs, less $2.9 billion in cash outflows. The CPP Fund routinely receives more CPP contributions than are required to pay benefits during the first part of the calendar year and then remits a portion of those funds for benefit payments in the latter part of the year. The portfolio delivered a gross investment return of 3.3% for the quarter.

For the nine month fiscal year-to-date period, the CPP Fund increased by $19.7 billion from$219.1 billion at March 31, 2014. This included $18.3 billion in net investment income after all CPPIB costs and $1.4 billion in net CPP contributions. The portfolio delivered a gross investment return of 8.4% during this period.

“The continuing climb in value across most international public equity markets contributed to the Fund’s return this quarter, as did our private investments and fixed income assets,” said Mark Wiseman, President & Chief Executive Officer, CPP Investment Board (CPPIB). “Our globally diversified investments continue to benefit the Fund, providing total portfolio resiliency against significant fluctuations within specific sectors or geographies, such as the rapid decline in oil prices recently.”

The Canada Pension Plan’s multi-generational funding and liabilities give rise to an exceptionally long investment horizon. To meet long-term investment objectives, CPPIB is building a portfolio and investing in assets designed to generate and maximize long-term returns. Long-term investment returns are a more appropriate measure of CPPIB’s performance than returns in any given quarter or fiscal year. 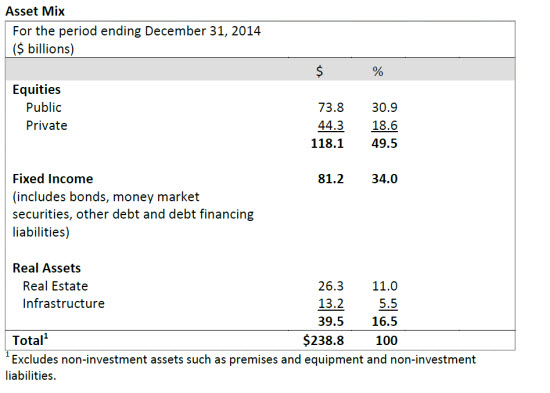 · Made a commitment of approximately US$60 million in Neusoft Medical, a leading domestic producer of diagnostic imaging equipment such as CT, MRI, ultrasound and X-ray machines in China, alongside our fund partner Hony Capital. Neusoft Medical’s products have been sold to over 90 countries and regions around the globe, serving nearly 8,000 medical institutions worldwide.

· Wilton Re, a portfolio company owned by CPPIB and Wilton Re management, signed an agreement to acquire Transamerica Life Canada and other businesses from Aegon N.V. for   $600 million. Subject to regulatory approval, Wilton Re will fund the transaction with additional equity capital provided by CPPIB.

· Formed a new U.K. regional joint venture with Hermes Real Estate for a 50% ownership of Wellington Place in Leeds. The total Gross Development Value is in excess of £185 million. The masterplan envisages 1.5 million square feet of commercial, retail, leisure and residential space that will make Wellington Place one of the biggest new city centre business quarters in Europe.

· Committed an additional equity allocation of US$400 million to Goodman China Logistics Holding (GCLH) joint venture with Goodman Group, which committed an additional US$100 million. With this increase, the partners have allocated a combined US$2 billion to GCLH, which was formed in 2009, and has invested in 27 logistics projects in 12 markets across mainland China.

· Expanded CPPIB’s real estate portfolio in Brazil during the quarter with additional equity commitments to retail and logistics assets. Most recently, we completed two retail investments, including a 44% equity ownership in a new shopping centre development in Nova Iguaçu, Rio de Janeiro, for R$187 million (C$90 million) with joint venture partner Ancar Ivanhoe, and an increased interest in Iguatemi Shopping, located in Salvador, from 15% to 18% for an additional R$56 million (C$25 million). Over the past nine months, CPPIB’s total equity commitments to Brazilian retail and logistics assets were approximately R$1.2 billion (C$560 million).

· Announced CPPIB’s A$525 million investment to build and operate a new tunnel motorway in Australia as part of a consortium that includes Transurban Group and Queensland Investment Corporation. This investment represents a 25% ownership interest for CPPIB. Called NorthConnex, the nine-kilometre motorway will connect Sydney’s northern suburbs with the Orbital road network and will be the longest road tunnel project in Australia.

· Formed a joint venture with Hudson Pacific Properties through which CPPIB acquired a 45% interest in a prime San Francisco office property, 1455 Market Street, for US$219.2 million. 1455 Market Street is a 1.0-million-square-foot, 22-storey, Class-A office building that fronts an entire block along 11th Street in San Francisco’s thriving Mid-Market neighbourhood. Hudson retains a 55% ownership stake and will continue to oversee management and leasing.

· Following quarter end, CPPIB sold its 50% interest in 151 Yonge Street to GWL Realty Advisors. Proceeds from the sale to CPPIB were approximately $76 million. Located in downtown Toronto, 151 Yonge Street was acquired in 2005 as part of a larger Canadian office portfolio acquisition.

· Sold a 39.4% interest in a Denver office properties joint venture to Ivanhoé Cambridge. CPPIB had made an equity investment of US$114 million in the joint venture in 2007. Proceeds from the sale to CPPIB were approximately US$132 million.

· It was also announced that André Bourbonnais will assume the role of Chief Executive Officer at the Public Sector Pension Investment Board, effective March 30, 2015, leaving CPPIB today. Mr. Bourbonnais joined CPPIB in 2006 and was most recently Senior Managing Director & Global Head of Private Investments.

Canada Pension Plan Investment Board (CPPIB) is a professional investment management organization that invests the funds not needed by the Canada Pension Plan (CPP) to pay current benefits on behalf of 18 million contributors and beneficiaries. In order to build a diversified portfolio of CPP assets, CPPIB invests in public equities, private equities, real estate, infrastructure and fixed income instruments. Headquartered in Toronto, with offices in Hong Kong, London, New York City and São Paulo, CPPIB is governed and managed independently of the Canada Pension Plan and at arm’s length from governments. At December 31, 2014, the CPP Fund totalled $238.8 billion. For more information about CPPIB, please visit www.cppib.com.